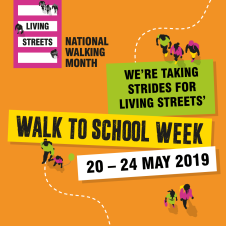 More than 40 schools across Oxfordshire will be taking part in national Walk to School Week as the campaign to promote exercise, improve road safety and reduce congestion steps up.

Thousands of pupils will be getting active from May 20-24 as part of an innovative scheme commissioned by Oxfordshire County Council's Public Health team working in partnership with Active Oxfordshire.

Walk to School Week is an extension of the WOW project supported by Public Health over the past two years. Run by Living Streets, the year-round walk-to-school challenge encourages children to collect badges each month as a reward for making journeys actively.

The council's Public Health team seeks to promote, improve and protect the health of local people. It's all part of the council's commitment to thriving communities – we help people live safe, healthy lives and play an active part in their community.

Since the launch of WOW across Oxfordshire in September 2017, active travel rates – including walking, cycling, scooting or 'park and stride' – have risen from 65 per cent to 88 per cent.

The scheme provides schools with a 'Travel Tracker' which they use to record the different modes of travel, providing valuable insights into travel habits.

St Mary's CE Primary School in Banbury is one of 20 schools across the county signed up to WOW and its pupils are shining stars when it comes to getting active and helping to reduce air pollution.

All 145 children in Years 1 to 6 are tracked and complete their own registration each school day on the Living Streets website.

When St Mary's adopted the scheme in October 2017, 57 per cent were active. Now 76 per cent are active three times per week.

Teri Smith, PE co-ordinator at St Mary's, said WOW was now an accepted part of its daily routine. She said: "We want all children to be as active as possible and also want to make sure we're doing what we can for the environment.

"There's lots of excitement over the way children get to school and making sure they achieve their badges. We're really proud of the way everyone has engaged with the scheme."

Headteacher Victoria Woods added: "We as a school are in a really built-up area and the last thing Banbury needs is for us to be contributing to the congestion.

"We teach children about road safety and behaving properly on their walk to school. The children really like the badges and doing their own registration. They don't have to walk every day which I think for working families makes it that little bit more accessible."

How WOW is making a difference

Pupils are rewarded with badges once a month if they walk to school at least once a week. There is the incentive to claim up to 11 badges in the school year.

Since the first 20 schools in Oxfordshire started the programme in September 2017: