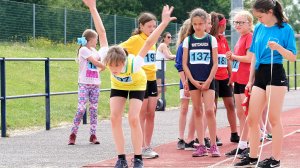 Horspath Athletics and Sports Ground played host to hundreds of youngsters on Friday (5th July) as they competed for medals in the final day of the Oxfordshire School Games.

The event marked the end of a series of competitions which has seen over 4,000 children compete for medals in 23 different sports in the last few months. Every Secondary school in Oxfordshire has been represented and 92% of Primary schools have also put teams forward, with many pupils experiencing their first major sporting event.

The events were organised by Active Oxfordshire, in partnership with the School Games Organisers and were supported by nearly 3,000 young leaders and officials.

Whilst at the final event on Friday the competitors were also encouraged to engage with organisations such as local mental health charity Oxfordshire Mind, sugar smart, and the Oxfordshire Fire and Rescue Service who gave youngsters the chance to try on uniforms and experience shooting a water hose.

The event provided a backdrop for the latest forum designed to bring together key leaders addressing inactivity in Oxfordshire and comes at a time when activity levels amongst young people are a hot topic.

Across Oxfordshire, research shows that nearly 80% children and young people fail to reach the recommended activity levels of 60 minutes each day which is needed to maintain good health, say Active Oxfordshire.

The School Games is one of several programmes aimed at giving young people an active start in life and to help develop vital skills like resilience, communication and teamwork.

However, school sport is just one part of the story. Paul Brivio, Chief Executive of Active Oxfordshire added: "The inactivity of young people in Oxfordshire is a ticking time bomb for the health of the next generation. However we know that young people need to be encouraged to be active both inside and outside of school. With 1 in 5 adults in the county also inactive, there is work to be done to make being active the norm, including improved education, investment and the widening of opportunities to make active lives the norm for children and young people across Oxfordshire.