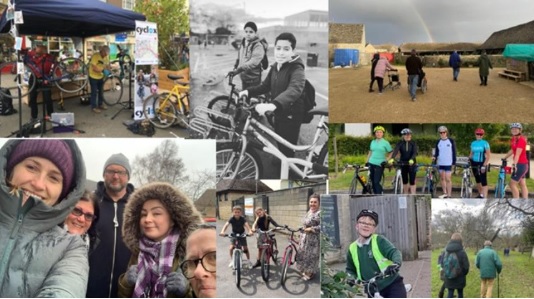 This month, we're celebrating the past six months of Active Travel across the county. So far, Active Travel has supported over 30 projects across Oxfordshire, with over 1,000 participants benefiting from walking and wheeling more.

Active Oxfordshire has supported the delivery of Community Activation projects aimed at supporting residents to make changes in their travel habits towards walking, wheeling and cycling and in the process, reduce levels of inactivity, and improve health.

Let's take a look at some of the key projects we've been involved in for the past 6 months:

Wheels for All Ebike loan scheme

Three dinner ladies, Tiffany, Dawn and Nichola have been taking part in the Ebike Loan scheme run by Wheels for All Oxford. They've been using the bikes to travel to work from Blackbird Leys through the Low Traffic Neighbourhood areas of Cowley, swapping car journeys for cycling. They loaned the ebikes for 3 weeks in total at the end of the summer term, before returning them to Wheels for All.

Tiffany said: "it's quicker by ebike than it was to take the car, and it's more fun. I do feel fitter because of all the cycling I'm doing"

Dawn said: "We have a laugh cycling together and we're becoming known on our route because often have a bit of a sing. I'm thinking of getting an ebike of my own"

Thanks to Active Travel funding and following on from their statutory Bikeability training, Windrush Bike Project (WBP) offers ongoing support to families of target schools to help them change travel habits. In particular those children in Year 6 who will begin travelling independently to secondary school. This will include supporting schools with Cycle Buses where appropriate and providing support to prepare children for travel, post Bikeability. In total, 56 children were taught to ride across 5 Primary Schools in Witney.

"Josh, now 8, got his first bike 5 years ago for his 3rd birthday. He rode with stabilisers but had a scare when they were removed. This resulted in anxiety around cycling and a refusal to try to re-learn.

In September 2021 the Windrush Bike Project ran a learn to ride club at Josh's school. Josh was eligible to borrow a small bike from the Bike Library which he learnt to ride on.

Within 2 weeks Josh was riding to primary school a mile away. He now rides to school every day and has gained a massive amount of self-confidence from the process. He has a series of agreed 'stop points' where he waits for an adult.

He rapidly grew out of the small bike he borrowed and now has a lovely 24" wheel bike from the library which fits him well. His enthusiasm has encouraged his younger brother who is 3 to learn to ride as well.

8000 maps were produced and distributed to every household in Cowley to demonstrate the walkability of the area. 1 map per household for 8000 households, delivered by volunteers

Since then, there has been significant dialogue between residents and Liveable Cowley on the map and how it has been used, and where improvements could be made.

What participants told us:

So, what's next for Active Travel?

Planning is underway for the next phase of the project. We have heaps of learning from this phase which will help inform us to help more of our local residents to walk and cycle more for both leisure and for travel.